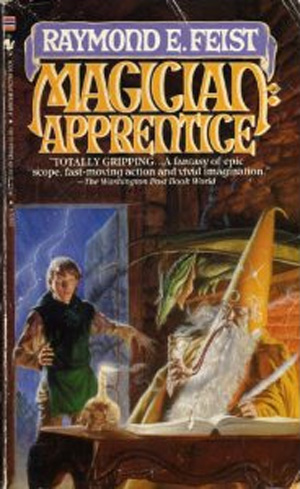 Its not often I get to review a book for which I’ve read the original, the author’s preferred edition, and the graphic novel interpretation. Magician: Apprentice is a book that I’ve read countless times, and The Riftwar Saga was one of my favorite original fantasy series along with the Dragonlance Chronicles books I read growing up. Like a lot of other fantasy novels, it was one I read prior to starting this site, so I decided to give it another read so I could include it here at Fantasy Book News. And as always, it was a delight.

Going back and reading Magician: Apprentice is like putting on an old coat that I’ve worn in years past, but has been hanging up in my closet for a while. Its comfortable, broken in, and I know what to expect. But I also know that its been long enough since the last time I’ve ventured through its pages that I’ve likely forgotten some of the details, so there’s bound to be a bit of variety. Its also valuable to compare some of the classics with some of the modern fantasy fiction I’ve been reading more of lately, and Magician: Apprentice is a perfect candidate.

Magician: Apprentice is a great book because of its simplicity. It doesn’t try to over-complicate anything, and is very direct with its characters, plot-lines and action scenes. I believe it is this simplicity that afforded Feist such success with this first novel in the Riftwar series: its an energized tale that is accessible to a broad range of readers. When compared with more recent fantasy novels, Magician: Apprentice is a bit shorter, and seems to move a bit more quickly than the majority of other fantasy novels I’ve read recently.

Feist writes with a passion in Magician: Apprentice, and the reader reaps the benefits. The novel has all the elements a reader expects from a fantasy novel and more: a coming of age tale, a few light romantic themes, very basic political structure, action on the open sea, plenty of battle scenes, a trek through the mines, and of course an invading army from another world. What more could you ask for?

Magician: Apprentice is a wonderful novel for teen readers as well as adults looking for a good tale. There is nothing in the novel that parents should have to worry about, so parents can be confident in buying this as well as the following books in the Riftwar Saga. And since its initial publication in 1982, its been adapted as a graphic novel by Marvel Comics, so readers can delight in seeing their favorite characters Pug, Kulgan and others come to life in the pages of a comic book.

I would highly recommend Magician: Apprentice to anyone looking to get started in Feist’s worlds of fantasy, and any readers just testing the fantasy novel waters for the first time. Its a delight you’ll come to appreciate for years to come.

You can purchase Magician: Apprentice