Review: The Name of the Wind by Patrick Rothfuss

Posted on February 7, 2009 by Jeff Pelletier

Book review of Patrick Rothfuss’s The Name of the Wind 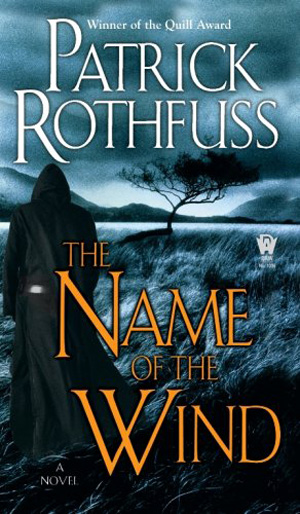 Before cracking open The Name of the Wind and reading one word, I had some pretty high expectations. This is supposed to be the series that eclipses The Lord of the Rings and redefines the genre. Patrick Rothfuss has been hailed as a master of the craft, and this is only his first venture into the genre. Generally, with hype of this magnitude, I’m almost unavoidably let down with the presentation. Kvothe has some pretty big shoes to fill.

This novel is of the epic high fantasy genre, and while its scope is rather grand, weighing in at 722 pages and set to span 3 books, the book is presented as a first-person narrative. If you’re not accustomed to this perspective of storytelling, you may want to be wary. However, how Rothfuss accomplishes this is creatively done to say the least.

The book is presented in a completely linear fashion. If you’re used to the constantly shifting perspective of a George R.R. Martin tale, the flashback-style of The Lies of Locke Lamora, or even the triple plot split of The Lord of the Rings series, you won’t find any of it here. The fact that Rothfuss could write a novel of this size, mainly from the perspective of one character, make it linear, and keep it as interesting as he does is a feat in itself.

And keep it interesting Mr. Rothfuss does. The pace is rather quick for a novel of this size. While Rothfuss is able to keep the pages turning, he writes in a extremely detailed and descriptive fashion. The settings are lavish, from the countryside to the city scenes to the University where the main charatcter Kvothe eventually finds himself. Where Rothfuss really shines is with his descriptive powers surrounding characterization. The details radiate in a circle out from Kvothe. I found his parents to be extremely well-developed, as well as his love interest and professors at the university. Even the bad guys get some fine treatment:

The voice came from a man who sat apart from the rest, wrapped in shadow at the edge of the fire. Though the sky was still bright with sunset and nothing stood between the fire and where he sat, shadow pooled around him like thick oil. The fire snapped and danced, lively and warm, tinged with blue, but no flicker of its light came close to him. The shadow gathered thicker around his head. I could catch a glimpse of a deep cowl like some priests wear, but underneath the shadows were so deep it was like looking down a well at midnight.

While the characterization is extremely well done, it is a bit concerning that the best descriptions seem to come with the characters that Patrick has probably dealt with in his own life.  Parents, your first love, teachers; these are all individuals that all of us have intimate experiences with and could probably do a decent job of transferring into a work of fiction.  It will be interesting to see how Mr. Rothfuss fares when taking his work in a different direction, by stepping into the minds of other characters, or dealing with characters that are not as easily identifiable to the average person.  This aside, the characterization accomplished in The Name of the Wind is a job well done.

The dialog is average, without too many stand out or memorable passages.  Like any great novel or work in any genre, The Name of the Wind is chock full of ideas and commentary that holds true in life.  This is possibly the most important part of fiction novels to me, as I feel that when I get to the end of a novel not only did I have a fun time getting there, but I’ve also got something to take with me and use later on in life.  Here are a few samples:

“Did you learn the whole language?”

“No. Of course not,” Kvothe said rather testily. “Only a portion of it. A large portion to be sure, but I don’t think you can ever learn all of anything, let alone a language.”

Toward the end of the summer I accidentally overheard a conversation that shook me out of my state of blissful ignorance. When we are children we seldom think of the future. This innocence leaves us free to enjoy ourselves as few adults can. The day we fret about the future is the day we leave our childhood behind.

Once I knew what the problem was, it was just a problem, nothing to fear.

My parents danced together, her head on his chest. Both had their eyes closed. They seemed so perfectly content. If you can find someone like that, someone who you can hold and close your eyes to the world with, then you’re lucky. Even if it only lasts for a minute a day. The image of them gently swaying to the music is how I picture love in my mind even after all these years.

The novel also places a heavy value on music: how it gets into a person’s blood and can consume them; the details of the life of the musician on the road; all the aspects of the first performance.  I won’t spoil any of these moments here, but it can be comical in its truth at times:

A poet is a musician who can’t sing. Words have to find a man’s mind before they can touch his heart, and some men’s minds are woefully small targets. Music touches their hearts directly no matter how small or stubborn the mind of the man who listens.

Overall, I believe Patrick Rothfuss’ The Name of the Wind completely lives up to the hype, and takes it a step further by connecting personally with me on a musical and emotional level.  I found myself reflecting after closing its pages on how I wish I had got my hands on it as a teenager, prior to attending college.  I think this book would have totally changed my outlook, and I would have treated the overall experience of schooling and knowledge with more respect and reverence.  It was interesting transitioning from reading The Sword in the Stone, which is a novel about a single relationship between teacher and student, to The Name of the Wind which details one student’s extreme passion and desire for knowledge. That I’ll be returning for the next installation goes without saying. I can’t wait to see what happens when Kvothe’s past catches up with him.

You can purchase The Name of the Wind

Interview with Patrick Rothfuss on The Name of the Wind