Lynch’s debut as a fantasy novelist made some waves in the industry, and his sequel had a big name to live up to. This is not just accomplished with Red Seas Under Red Skies. This time, the stakes are higher. I gave The Lies of Locke Lamora 8 out of 10 stars; it was a very quality debut. Lynch has managed to out-do himself with Red Seas Under Red Skies. I believe Lynch is defining a new genre: action fantasy. Sure, there are plenty of other action novels out there, and Lynch’s fantasy books remind the reader of such other great page-turners as Dan Brown’s works. The difference is that Lynch’s novels are huge – Red Seas Under Red Skies in paperback is just over 760 pages. Lynch’s ability to pack over 700 pages with non-stop page turning action is simply unmatched.

Red Seas Under Red Skies has all the elements you would expect from a great action novel: gambling, fighting, and pirates. I’m actually not sure what else I’d add if I had the option. Both Locke and Jean are back, this time moving their thievery to another city, after taking Camorr for all it was worth. The book moves from a deviously named casino, the Sinspire, to the complex of the Archon, general of the city of Tal Verrar’s military, out to the open seas where we find our two main characters impersonating yet another duo, this time a captain and his first mate.

The dialog is great. Lynch has a special ability with business transactions, when one character tries to haggle the price of an item with another. There was a great passage in The Lies of Locke Lamora that I didn’t note; luckily I noted the page when I found another such argument over purchasing pears in Red Seas Under Red Skies:

“A full volani?” Locke feigned outrage. “Not if the archon’s favorite whore held them between her legs and wiggled for me. One centira is too much for the lot.”

“One centira wouldn’t buy you the stems. At least I won’t lose money for four.”

“It would be an act of supreme pity,” said Locke, “for me to give you two. Fortunately for you I’m brimming with largesse; the bounty is yours.”

“Two would be an insult to the men and women who grew these, in the hot glass gardens of the Blackhands Crescent. But surely we can meet at three?”

“Three,” said Locke with a smile. “I have never been robbed in Tal Verrar before but I’m just hungry enough to allow you the honor.”

I don’t even really need to discuss the pace of this novel. Its action, at its best. Here you’ll find Locke and Jean impersonating nobles and gaming against terribly attractive women in some of the most high-stakes card games you’ve ever seen. You’ll discover plots against the government and the private sector, pitting them against one another. You’ll come across insane sea adventures, creatures that lurk just under the surface of the ocean, strange voices that call to you from the water, and death-defying leaps from cliffs and the tallest buildings in the city. In other words, it moves.

Naturally, the fast paced nature of such a novel comes with an outstanding serving of captured moments, like this:

The first notion Jean had that the floor had opened up beneath his feet was when the view of Tal Verrar suddenly seemed to move up toward the ceiling; his senses conferred hastily on just what this meant, and were stumped for a split second until his stomach weighed in with nauseous confirmation that the view wasn’t doing the moving.

It seemed to Locke that sweat was now cascading down his face, as though his own treacherous moisture were abandoning the premises before anything worse happened.

Combined with Lynch’s ability to conjure up imagery via delicious description:

As she flew past, Jean—his rope work quite forgotten—felt his stomach flutter. She had it. She wore it like a cloak. The same aura that he’d once seen in Capa Barsavi, something that slept inside until it was drawn out by anger or need, so sudden and so terrible. Death itself was beating tread upon the ship’s planks.

and you’ve got a knockout combination for some of the most in-your-face action fantasy that I’ve ever read.

The cast of characters in Red Seas Under Red Skies is fantastic. Not only are Locke and Jean back, but we’re introduced to a daring couple, heads of the Sinspire, Requin and his lover Selendri, a woman who’s face and arm are half covered in brass due to burn marks. The other large new character is Maxilian Stragos, the Archon of Tal Verrar. He’s surrounded by his “Eyes”, super efficient guards who wear full brass masks. And finally, you’ll get to meet Zamira Drakasha, captain of the Poison Orchid, and her first mate, Erzi Delmastro; two strong female characters who rule their ocean domain. In the background are the Bondsmagi, still upset for what Locke and Jean did to one of their own in The Lies of Locke Lamora. And as usual, you’ll find Locke and Jean taking on so many personas you’ll wonder how they keep them straight.

You can pick up Red Seas Under Red Skies

Review: The Lies of Locke Lamora by Scott Lynch

Book review of Scott Lynch’s The Lies of Locke Lamora 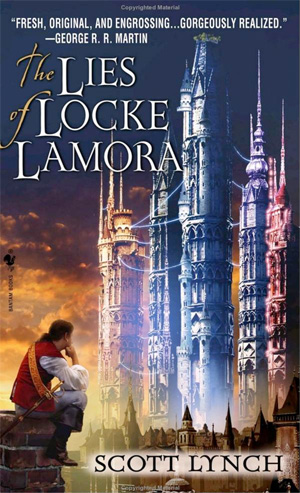 Let the sun shine down.  On the other hand, if its looking overcast, there’s always the Falselight.

The Lies of Locke Lamora is an action-packed romp through high-society, with characters masquerading as everything from the lowest low-life to the most regal dandy and everyone else in between.  With hints of the fast-paced nature of The Da Vinci Code, the book jacket describes it as one part Robin Hood and one part Ocean’s Eleven, and the tale more than lives up to this description.  This book has all the best of the thieving lifestyle, from scaling towers six stories high, to impersonations of city officials, to some really sticky fight scenes.  While the accessibility of this book will appeal to just about anyone, there are definitely a few moments that would be hard to swallow for a younger crowd. This is an extremely fast-paced action adventure, broken up by flashbacks that somehow don’t hinder the pace in any way but only heighten the anticipation of getting back to the main storyline.

Locke Lamora and his band of Gentleman Bastards roam the streets of Camorr, taking part in all kinds of fantastic city intrigue.  Its no wonder that the rights to the film have already been picked up by Warner Brothers.  There are so many good one-liners and situational scenes in this book, its hard to imagine it not translating to the big screen.

Lynch does an above average job of characterization with the different members of the band, as well as the other citizens and denizens of Camorr.  The hero Locke is anything but; he’s your average Joe, or at least he appears to be.  Not having above average physical qualities certainly can have its advantages when theiving is your main source of income in a major port city.  His supporting band of Gentleman Bastards are the cream of Camorr’s thieving crop.  The background of each character is painted nicely, with new aspects and details of their training surfacing throughout the novel.  While you come to love Locke and his band of thieves, the mob bosses (which Lynch refers to as “Capas”), and other various characters truly bring this novel to life.

The various escapades take place to the backdrop of the city of Camorr which is original as it is deadly.  From true beauty to obscene brothels, this book runs the gambit of city life.  Scenes range from the most miniscule, dingiest bar you could imagine to the grandest of the grand stages. From new takes on ancient Roman Colosseum-style fighting, to an intricate network of towers and lavish festivals, Lynch paints a vivid picture of an ancient (or modernly regressed?) city in its prime.

What really shines in Lamora’s first effort is his ability to constantly build up the sense that there’s absolutely no way Locke and his fellow thieves are going to be able to accomplish their current task at hand, only to have them weasel their way out, around, or straight through whatever seems to be in their way.  Coupled with fantastic dialogue, this is a one-two punch that can’t miss.  One scene in particular stands our where we find Locke is haggling with a store merchant.  Its simply some of the best fast-paced dialog I’ve read in years.  Lynch captures moments like I’ve never read on paper.  They range from the intense:

Let’s start wobbling, shall we? said Locke’s knees, but this offer was met by a counterproposal from his better judgment to simply freeze up and do nothing, like a man treading water who sees a tall black fin coming straight at him.

To the just plain hilarious:

“What?” Sofia squeaked like a girl of eight.  A particularly squeaky girl of eight, much accustomed to squeaking, loudly.

Note to self: Use the same word three times in two sentences the next time I’m trying to be funny.

Rarely does a novel come along that is as brilliantly woven as Scott Lynch’s first venture into the fantasy genre.  The Lies of Locke Lamora truly sings a sweet symphony of subterfuge.  I have to say that this is the most complete action fantasy novel I have ever read.  It will be interesting to see where Lynch takes it for the next six novels.  If there are as many twists and turns as he’s delivered in his first book, this is one reader who will be back to join the Gentleman Bastards on many, many adventures to come.

You can purchase The Lies of Locke Lamora

Interview with Scott Lynch on The Lies of Locke Lamora