Chronicles of the Necromancer 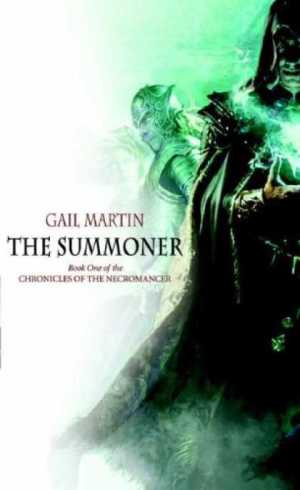 Before I started reading The Summoner, my only prior knowledge of the novel and of Gail Z. Martin were that Pat of Pat’s Fantasy Hotlist had run a contest for one of Martin’s novels a while back. I also featured The Summoner in a post last year regarding a slew of novels with “mysterious hooded figures” on their covers. Upon picking the novel up, I did notice that the font was rather large when compared with other epic fantasies of similar girth, which may imply that the publisher was attempting to “fatten up” the novel to epic stature.

Unfortunately for The Summoner, it didn’t get much better after I started reading. The first issue I took with The Summoner was its light treatment of the dead, specifically in the form of ghosts, that are near commonplace throughout the novel. I like the idea of undead creatures in novels, but they have to be handled delicately to be believable. We had the main character in The Summoner conversing freely with spirits within the first chapter, and an annual festival attended by living and dead guests alike, which was a little overboard for my taste.

The characters in The Summoner don’t do much to aid the novel. We have a few interesting main characters, but the supporting cast quickly blends into “supporting guy #1”, “supporting guy #2”, etc. This issue may have been reinforced by the weak dialogue between said characters, which at some points led me to believe that this was a novel geared toward a young adult audience.

Which leads me to the next baffling issue I took with the novel: while it seems intentioned to target a younger audience, there are mentions of things like “The Whore Goddess”, and other language that is frankly inappropriate for a 13 or 14 year old to be reading. It seems that Martin may have been a bit confused as to the audience she was attempting to appeal.

Layering on the issues, there were multiple times in this novel where I was reminded of something that had just happened two or three pages prior. To me, this borders on insulting. If I pick up an epic fantasy, I expect it to move quickly, and not have to repeat itself in order to pound home messages that frankly, could have been handled once, and subtly at that, and it would have served the novel much better.

All these issues withstanding, I did find glimpses of writing in The Summoner that I thoroughly enjoyed, and was prepping to give the novel a total of 5 out of 10 stars. Unfortunately for The Summoner, toward the end of the novel, I experienced the first instance in my entire life of getting visibly angry at a novel. Spoilers to follow.

I don’t know about you, but in addition to reading a plethora of fantasy novels when I was younger, I played a lot of table top role-playing games. One of the worst things any author can do is to port actual events of role-playing games directly into their novel. When the king at the end of The Summoner carted out a literal enormous cart of treasure to reward our heroes for their good deeds, I took my eyes from the pages, looked out off my deck, and said, out loud, “what the fuck”. This type of event occuring in a fantasy novel isn’t merely unacceptable, its the type of rubbish you encounter in role-playing games, and even there its the result of an unimaginative Dungeon Master.

So there it is, my rant on The Summoner. I guess it didn’t help any that my reading of The Summoner was sandwiched between two fantastic novels: The Dragonbone Chair by Tad Williams, and A Song for Arbonne by Guy Gavriel Kay. When you read novels of such a high caliber in such close proximity to a novel like The Summoner, it really does paint the qualities of each in stark contrast.

You can purchase The Summoner