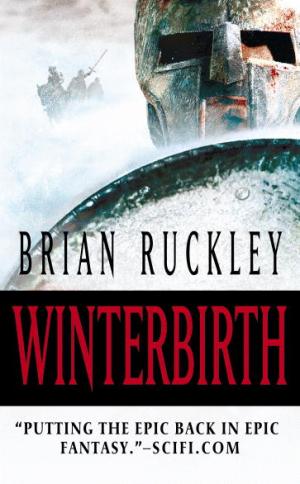 Winterbirth is the first book in The Godless World trilogy, which has gained popularity recently with the release of the third novel in the series, Fall of Thanes. I was hoping for a dark romp through a medieval world, as Winterbirth has received high praise from both traditional publications and blog reviewers like myself. Unfortunately for me, Winterbirth didn’t deliver.

I’ve discussed the importance of characterization here on Fantasy Book News numerous times, and what stands out most about Winterbirth is its lack of memorable characters. There are a few characters we follow in Winterbirth, adding variety without being overwhelming. Unfortunately I found it difficult to stay interested in any of them for very long. When the characters in a fantasy novel start to blend in with generic characters from other fantasy novels, it makes getting into a novel very difficult indeed.

Winterbirth does offer a look into the lives of men at war, travelling and fighting for their families back home, and Ruckley is very adept with description, and painting a vivid image of life on the road. The other overarching plotline follows one of the main characters, Orisian, on a long voyage, my favorite part taking place during a trip through snow-capped mountains. This was probably the only part of the novel I felt immersed in, and went into that wonderful mode where a novel takes you away to another place. It was great while it lasted, unfortunately for Ruckley, it wasn’t a very large part of the novel.

I have heard that the subsequent novels in this series are good, so I can hope that the characterization and overall quality improves from here on out, but getting through Winterbirth was a tough job for me.